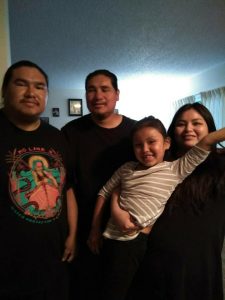 From the Earth First! Newswire

Happi June 11th to those in the struggle! This is Happi here and I am so grateful to be free from Morton KKKounty’s corruptive imperialistic grasp! I would like to take this time to not only remember our friends/relatives/homies/comrades but to also take collective action today against the prison industrial complex by bailing those in need out. That is what I choose to do today with the bail that was given to me and returned upon my release, NOT IN CHARITY BUT SOLIDARITY. As an indigenous prison abolitionist I feel all prisoners are political due to the severe imposition of colonial statehood. So do what you can today with a firm stance against those who keep our relatives in the system! Much love to those who can’t stand with us on the outside!

I was incarcerated by Morton KKKounty back in January and falsely charged with trumped up felonies due to my continued involvement organizing in the Standing Rock territory. Morton KKKounty has dropped all felony charges due to “lack of evidence” as well the supposed “victims” who are my relative and friend who refused to testify against me in general, but especially not in a courtroom ruled by fascist white supremacists; these fascist white supremacists are inherently vindictive, and also continuously harass and harm Water Protectors still going to court for their support in the NO DAPL struggle, and those who generally continue to exist in their ancestral homelands.

In Morton KKKounty Jail most of my fellow inmates were indigenous or people of color who were caught up in the cross-fire-struggle, or were just trying to get by in a colonial United Snakes of amerikka who stayed in the system due to the vilification by the mainstream media, which promotes the idea to the public that those who go to jail are automatically guilty, which defeats the States redirect of “innocent until proven guilty” and insinuates “guilty until proven innocent”. This then becomes an almost automatic guilty verdict in the realities of colonial kkkourt. Even the pretrial detention with the bail bond system that exploits the poor who have little to no money and cannot afford bail, then lose custody of kids or jobs and houses. The very things the court promotes as qualities or possessions of a good assimilated ’citizen,’ and gains favor to the eye of the public ultimately becomes the things you lose before going to trial.

Most under privileged people are given public pretenders who are overburdened with cases, and they don’t have the capacity to care, so the ‘client’ just becomes a paycheck, and they feel forced to take plea deals that do not work or support the individual, and this alienates them from their families and ‘society’ by further incarcerating them in their own homes or tracking them with gps ankle monitors, increasing the odds of probation/parole violation. This type of ‘off location incarceration’ creates a stigma that makes it harder to survive in this colonial world, i.e. get a job etc. Many who are forced to take pleas due to pretrial detention are reminded of the treaties we as indigenous people were forced to take by ‘touching the pen’ in surrendering or face death.

Morton kkkounty and their mainstream media work together to vilify Water Protectors with tactics similar to Cointelpro which have been used against similar movements like AIM and the Black Panthers. These two forces working together against local activists and indigenous community is not unheard of and we must not believe the mainstream media or the redirect of the police on charges that are created as false narratives to detract support to our loved ones, and either cage or kill ‘activists’ they may not be able to easily cage or kill otherwise.

I hope today as we collectively put our minds together to take down these systems of oppression through conversation and the actual dismantling of the prisons to the bare minerals that comprise them, that we remember to love each other and continue to support all those oppressed by a colonial empire hell bent on hurting all those who resist domestic abuse, resource extraction, white supremacy, patriarchy and all things colonial. For the imprisoned with all the love and rage, Happi