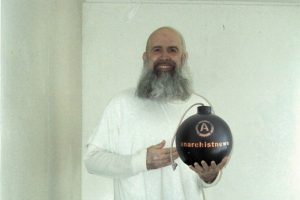 Hope I’m still alive and kicking this June 11. It’s possible that I’m facing imminent death. Now, don’t panic. Okay. Wait. Please panic a little bit. It will make me feel loved and valued. If you don’t at all, that would hurt my feelings.

It all started with an article posted for last June 11 that advocated the use of drones to drop guns into prisons. The creepy sexual-predator lawyer for the ODRC who groped me in 2013 – Trevor Matthew Clark – wrote up a ridiculous conduct report accusing me of rioting and gang activity and extortion related to that online posting. You can check it out here. It must be worth reading, as prison officials tried to kill me for it.

After 7 months in seg. I was scheduled to transfer to Lucasville. Before that even became official, however, prisoners I know at Lucasville sent word through others, warning me that security staff at Lucasville were talking openly about my impending transfer there and about their plans to leave me hanging from a bedsheet and staging it as a suicide. Lucasville staff planned to murder me.

With the plot exposed publicly, the fartgoblins transferred me instead to the super-duper-max at Youngstown. I wasn’t there long, though. On April 15, unnamed fartgoblins without identification and wearing military fatigues kidnapped me at 4:30 in the morning and delivered me to a prison out of state. Virginia. I now face transfer to Sussex II State Prison, the most violent prison in Virginia.

Not sure, but if the fartgoblins intended to have me whacked, I imagine that’s where they’d send me.

See, a long time ago, I finished a three-part zine, Ohio. I intended it to be three parts, each part presenting an argument for the illegitimacy not just of Ohio, but of the whole hierarch delusion. I had no intention of re-visiting that zine…until this latest round of state terror that convinced me that I should write Ohio, Part IV, which would essentially address the question of what we ought to do about it.

I wrote that. Got it out. Friends are presenting Ohio to Little Black Cart for publication. So, if I’m dead – and I hope I’m not – get Ohio, read it, and gather a few thousand friends and do it.

Here’s the gist: we need to converge on one vital point in the larger program. I suggest Ohio, for a lot of reasons. We need launching points around the state and some inside of it, places where rebels gather and prepare for resistance. This strategy is based somewhat on the WTO protests in 1999 and on the ADX pipeline resistance where folks converged.

Then, we wild out.

All of this is preceded by a couple of important things. First, we need the development of a statewide database much like blastblog.noblogs.org –  a blastblog 2.0, maybe – where all Ohio officials’ home addresses are posted…from county judges and prosecutors to the governor and all of the legislators…along with courts, courthouses, prisons, colleges, and anything essential to the operation of the hierarch program.

Second, we need folks transmitting 12 Monkey materials into every single Ohio prison. Those materials can be found at:

It shouldn’t be hard to develop cooperative relationships with prisoners at each of the prisons and then collaborate on methods for introducing those materials. That way, prisoners can prepare to wild out at the same time as the convergence to end all convergences.

At any rate, I detail a number of inter-connected and mutually-enhancing strategies for essentially destroying the state and the economy, making it impossible for the system to recover.

What I’m suggesting is that such an unraveling hole in the middle of the program would have no only incalculable ripple effects, but would also inspire other rebellions elsewhere that would only intensify the disruption and culminate in a kind of cataclysmic systems failure.

The idea is the gather forces to overwhelm one space – “shock-u-py” – and create a critical situation. So, Ohio is like my single-most ambitious effort, my contribution to the ongoing and evolving dialogue on how to most effectively bring the inimical system down, my vision of resistance.

And I may have gotten it out just in time. In just a few hours, I transfer to the prison where, if Virginia intended to carry out the assassination that was thwarted in Ohio, I would be transferred.

So, if I’m dead, avenge me. Bring my vision of resistance into reality, and improve upon it.

If I’m still alive, avenge yourself. Bring my vision of resistance into reality anyway.