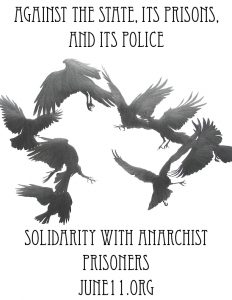 “June 11th is a reminder to us that though we spend our days outside of a prison many of our friends and allies spend theirs behind bars having sacrificed what little freedom they had to fight for something greater than themselves. We have a responsibility to them and to ourselves to struggle and fight until all are free.”

When you’re a political prisoner, the cards are stacked against you in a very purposeful way by the carceral State. Prisoners who feel isolated from their families and friends, uncared for, and forgotten, are more easily demoralized and depoliticized. For these reasons, it means so much for supporters on the outside to show solidarity with incarcerated comrades by maintaining contact through letters, sending books, and raising funds for their commissary needs. Sharing ongoing updates with your networks about how prisoners are faring while locked up is an act of resistance. New York City Anarchist Black Cross compiles and publishes a newsletter every other week for just this purpose.

Through June 11 and other campaigns, activist supporters from all over the world are regularly reminded that the collective work for liberation and the abolition of the prison industrial complex is intimately linked to prisoners’ struggles. After all, any one of us who demonstrates our defiance of the State’s profit-driven, racist ecocide could be next. Movements cannot afford to abandon prisoners who have put their freedom on the line — sometimes for decades — for acting upon their ethical convictions.

Since 2004, when June 11 was established as the International Day of Solidarity with ecoprisoner Jeff “Free” Luers, people from around the world have come together to show their support for anarchist and other political prisoners through a variety of tactics that have ranged from letter-writing events to banner drops, and more. We invite you to join the day of solidarity by attending a local event or simply writing a letter from wherever you are.

Marius Mason, a trans Green Scare prisoner and (previous CLDC client), is an anarchist environmental, animal rights, and labor activist currently serving nearly 22 years in federal prison for acts of property damage carried out in defense of the planet. He is also a painter and poet. You can learn more about Marius and how to support him HERE.

CLDC client Eric King, is another prisoner who urgently needs support. Eric is an anarchist political prisoner serving a 10-year sentence for attempted arson of a government official’s office in Kansas City, Missouri, in September 2014. He acted in solidarity with the Ferguson uprising and rebellion — a movement that took place over the summer of 2014 in response to the Ferguson police murder of Michael Brown. Last month we filed a federal civil rights lawsuit on Eric’s behalf against the Federal Bureau of Prisons (“BOP”) and more than 40 of its correctional officers. His constitutional rights have been continually violated since 2018 and his life and safety are regularly in jeopardy in retaliation for his political and anti-racist actions while incarcerated. King has been held in solitary confinement (the Special Housing Unit, or SHU) for over 1,000 days with no explanation or legal justification, in violation of BOP and federal statutory policy. He is currently one of only 80 people who have been held in the SHU for more than a year, let alone almost three years.

You can learn more about other incarcerated anarchists, by visiting the June 11 website, which also includes information about how to reach out and show your support — which is appreciated more than those of us on the outside could know. If you have never written to a prisoner before, that’s OK! You can learn more about sometimes very stringent prison rules regarding mail to prisoners and how to start HERE.

‘Til the walls fall!