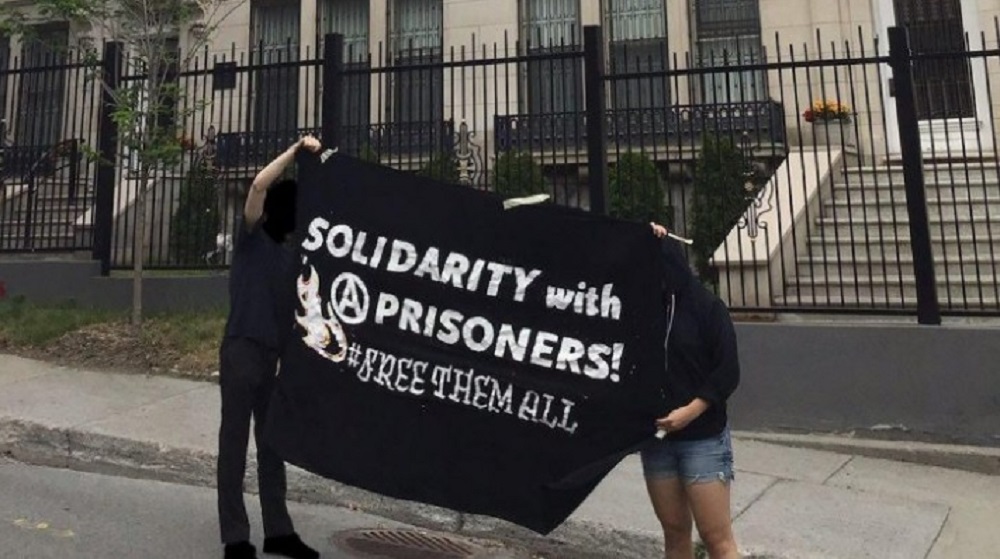 In the summer of 2020, three high schoolers – Bogdan Andreev, Denis Mikhaylenko, and Nikita Uvarov, all 14 years old – were arrested in the city of Kansk in the Krasnoyarsk region of Siberia, within the claimed borders of the Russian state. The three boys are accused of forming a terrorist organization, and plotting, among other things, to construct a model of the Russian secret police (FSB) headquarters in the game MineCraft then blow it up. More credibly, they are accused of demonstrating solidarity with Azat Miftakhov, a graduate student in mathematics in Moscow and an anarchist, presently aged 28. Miftakhov was initially accused of constructing a smoke bomb that had been thrown into an office of the ruling political party over a year before. He has more recently been sentenced to six years in a “penal colony”. Andreev, Mikhaylenko, and Uvarov are all awaiting trial.

On June 13, we held up a banner that says “Solidarity with Anarchist Prisoners, Free Them All” outside the Russian consulate in Montréal, located at 3655 avenue du Musée. We did this in part to mark the occasion of the day in solidarity with Marius Mason and all long-term anarchist prisoners on June 11, but also to signal our desire to keep in mind the situation in Russia, where even very young people face the risk of entering the prison system and, perhaps as a result, never leaving again.

Our thoughts go out to all our comrades inside, anarchist or not.